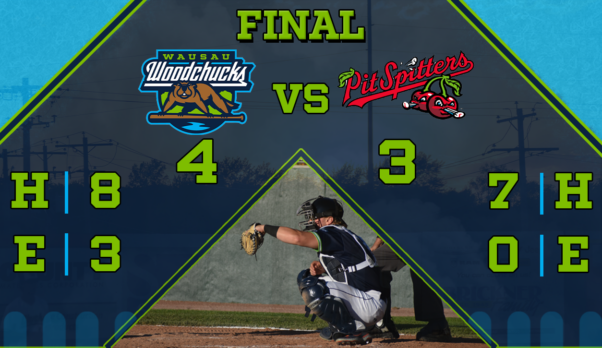 WAUSAU The Wausau Woodchucks took the Traverse City Pit Spitters to extra innings in an intense pitching duel on a fine Friday night at Athletic Park and prevailed in the bottom of the 11th with a 4-3 win in action Northwoods League baseball.

It was a quiet game with only a handful of hits until the fourth inning when the Pit Spitters scored two runs in the top of the inning. The Woodchucks didn’t let them off the hook as they added a run late in the fifth inning on a Brock Watkins (BYU) home run.

Jack Wenninger (Illinois) pitched a fantastic five innings, recording five strikeouts in his third start for the Chucks. Kevin Kilpatrick (Houston) hit a single to center field to give the Woodchucks their first baseman in the bottom of the sixth. He stole second and third, but Wausau couldn’t get him in to score.

Watkins started the Woodchucks with a bang late in the seventh inning by driving a double to the wall of center field. Brent Widder (Evansville) would move the second baseman to third on a sacrifice fly, and Camden Janik (Illinois) delivered an RBI with another sack to tie the game 2-2.

Wausau threatened in the bottom of the ninth as Watkins drove another double into right field, and Widder again moved him to third, but the Woodchucks couldn’t end it.

The Pitspitters brought in the ghost runner who started at second base at 11th to give them a 3-2 lead. Woodchucks ghost runner Hunter Dorraugh (San Jose State) stealthily stole the third and scored to tie the game on a wild pitch that fell on the backstop.

Mark Shallenberger (Evansville) kept the momentum going by smashing a double from right field. Zach Levenson walked on to give the Woodchucks runners first and second. A wild pitch got both runners forward, and an intentional walk from Watkins will charge the bases with one out. The Woodchucks fired a deep shot into left field from Watkins for the 4-3 win.

The Chucks (9-10) will face the Pit Spitters (8-11) again on Saturday at Athletic Park. Doors open at 5:05 p.m. and first pitch at 6:05 p.m. Chucks players will wear specialty jerseys that will be auctioned off to raise money for Aspirus Safe Kids. Tickets can be purchased online at https://wausau-woodchucks.nwltickets.com/ or by calling 715.845.5055.