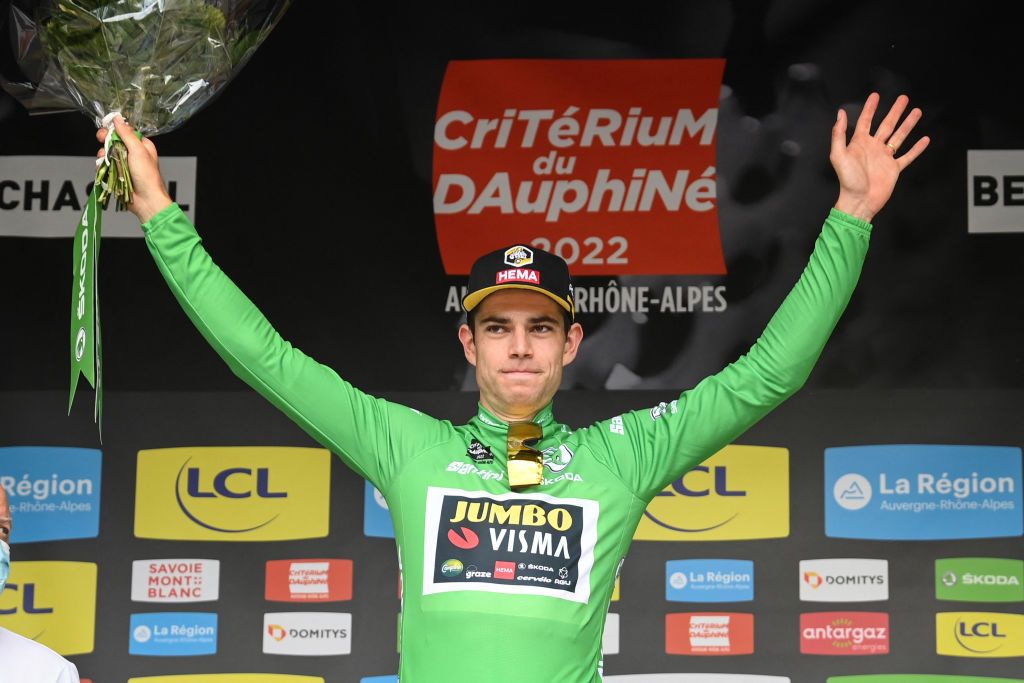 The Tour de France sprinter’s green jersey has been a dream for Wout van Aert since at least 2020 after finishing the Grand Tour for the first time. This season, Jumbo-Visma have agreed to support those ambitions alongside Primož Roglič’s race for overall victory. Van Aert showed on Sunday during the opening stage of the Critérium du Dauphiné that he was on the right track for July.

Van Aert, 27, has won six Tour de France stages to his name, and after winning three different types of stages last season – from a breakaway on Mont Ventoux, in the time trial of the 20 and in the most coveted bunch sprint of them all on the Champs-Élysées – expectations were skyrocketing for his future green jersey chances.

After starting the 2022 season with a victory in the Omloop Het Nieuwsblad and the points classification and a stage in Paris-Nice, Van Aert focused on the Classics where he took victory in the E3 Classic and podiums in Paris-Roubaix and Liège-Bastogne-Liège. He then stepped away from the competition for a reset and altitude training, revealing in his interview after the Dauphiné stage victory that he had spent the last few weeks fine-tuning his sprint.

“I had a great spring season but I wasn’t always happy with the feeling of the sprint. It’s definitely something we’ve been working on over the last two weeks and if it pays off immediately, that’s is always a good feeling,” Van Aert said.

“Today was a nice confirmation of a nice build-up over the past few weeks,” said Van Aert, adding that he hadn’t felt well heading into the race. “I came here with a few question marks – after a period of preparation, it’s always difficult to predict how it will go in the race. I felt pretty good and I think we are on the right track to reach the best possible shape before the Tour. On a stage like today, I can already show my good legs and it’s a pleasure to feel that.”

Van Aert had to sacrifice his last leader Christophe Laporte in the race against Beauchastel on the 191.8 kilometer stage after QuickStep-AlphaVinyl’s Remi Cavagna attacked in the last two kilometers. But even before the sprint, Jumbo-Visma burned matches to long distance sprinters like Dylan Groenewegen (BikeExchange-Jayco) and Phil Bauhaus (Bahrain Victorious) after the second crossing of the Côte du Chambon de Bavas with 36 km to go .

Overcoming the climb with enough left to sprint and beat fast men like Ethan Hayter (Ineos Grenadiers) was another good indication for Van Aert.

“If you look at the profile today you can expect a tough final. There were a lot of teams interested in dropping a few sprinters and I was able to hold on and felt good for the sprint,” did he declare. “It’s really good. In the climbs I was quite comfortable, normally it suits me when it’s a tough final like this. But then in the sprint there were guys like Hayter who had to be beaten – he’s doing very well this season. It was difficult to be the boss but in the end it happens so I’m happy.”

The rest of the Dauphiné will be a dress rehearsal for the Tour de France for Jumbo-Visma, with Van Aert promising to defend his race lead before supporting Roglič in the tough final stages next weekend.

“We are here with a solid team. I think the coming stages suit me quite well, so we will certainly try to defend if possible. This weekend I hope to hand over to Primoz but there are a lot of tough steps to come first.”