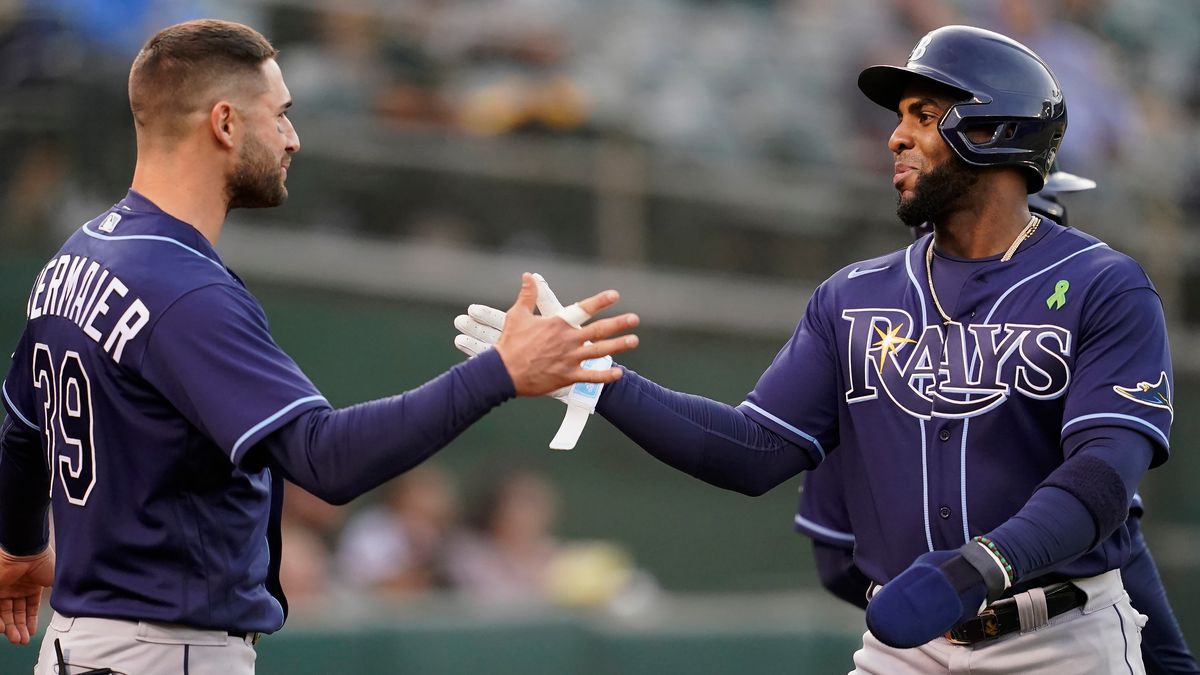 So they flew across the country, donned their navy jerseys for the first time and put on a great show on Monday night, beating the A’s 6-1.

Drew Rasmussen gave them the head start they needed after their pitchers allowed 18 runs in the previous two games, limiting the A’s to one hit in five good innings, and four relievers finished the combined at two hits.

The offense showed some life, as Yandy Diaz started the game with a bang, and most of the other hitters followed suit, with five players driving in runs and seven hits (Wander Franco among the four who made the two).

And the embarrassing attendance figure wasn’t theirs, as the 2,488 announced was the lowest in Oakland since Sept. 9, 1980, when the A’s had 2,443 for the visiting Rangers.

The switch to navy jerseys – the production of which had been delayed and arrived last week – was a cosmetic adjustment for the Rays. The improvement in performance on the pitch was much more significant.

“We definitely want to get back to our style of baseball,” manager Kevin Cash said. “We’re not used to having unbalanced games against us. Tonight was a great start – to pitch well, play good defense behind our pitchers and get hits in a timely manner.

Diaz leading a game at the Oakland Coliseum with a home run is nothing new. The last time he was at the top of the Rays’ order there was the 2019 American League wild card game, when he hit his first time and again in his second.

“I really like to hit first,” Diaz said, via team interpreter Manny Navarro.

Thus making the bigger question why Cash would hit Diaz anywhere but the lead here; in three games of 2021, he reached fourth, third and fourth and was combined 1 for 12.

After the A’s tied it in the second — the only two base runners allowed by Rasmussen — the Rays regained the lead in the third and continued to add, improving to 13-10.

In the third, hits from Diaz, Franco (who was back in the lineup after missing Sunday’s game with a strained right hamstring) and Randy Arozarena got two runs. They got two more in the fourth on the first of two doubles from Manuel Margot and RBI singles from receiver Mike Zunino and Franco. And they added one more in the fifth when Margot passed Kevin Kiermaier.

Columnist John Romano will be sending out the latest Rays news and analysis to keep you up to date each week during the season.

You are all registered!

Want more of our free weekly newsletters in your inbox? Let’s start.

Explore all your options

With the Rays held to four points overall in the previous two games, Cash wants to think Monday’s performance was the start of something offensive.

“Everyone sort of played a role,” he said. “Some of the guys who were a bit quiet seemed to have really contributed. So very encouraging.

Zunino said he saw it coming.

“It’s like we’re so close,” he said. “We’ve been in a place where guys are starting to have better sticks, guys are driving the ball more. It’s one of those things where you know at some point it’s going to open up. And (Monday) was a good night. Hopefully we can keep rolling (Tuesday). “

Rasmussen also did well on the mound.

While he hasn’t had the dominant trick for big strikeouts and swing-and-miss numbers since his last start, he’s only allowed two base runners — a two-out walk to Seth Brown then, after a stolen base, a two-out single for Chad Pinder — for the only run, striking out three.

“I didn’t think my execution was that good today,” Rasmussen said. “But (Zunino) did a good job changing gears a lot. Now it was good enough to throw him in the area and they hit a lot of balls hard and they found gloves.

Four relievers followed — Jason Adam, Phoenix Sanders (who left after an inning when his back stiffened and could be headed to the injured list), Ryan Thompson and Andrew Kittredge — to round out the two hitters.

Rasmussen’s best shot may have been his first, opting – much like the starting pitcher’s decision – to wear the navy blue jerseys, which were delayed due to production issues and only delivered last week. . The Rays were 55-35 wearing them last year.

Zunino added: “Shoot, it’s not a coincidence when we bring them back.”

Sign up for the weekly Rays Report newsletter to get fresh insights on the Tampa Bay Rays and the rest of the majors from sports columnist John Romano.