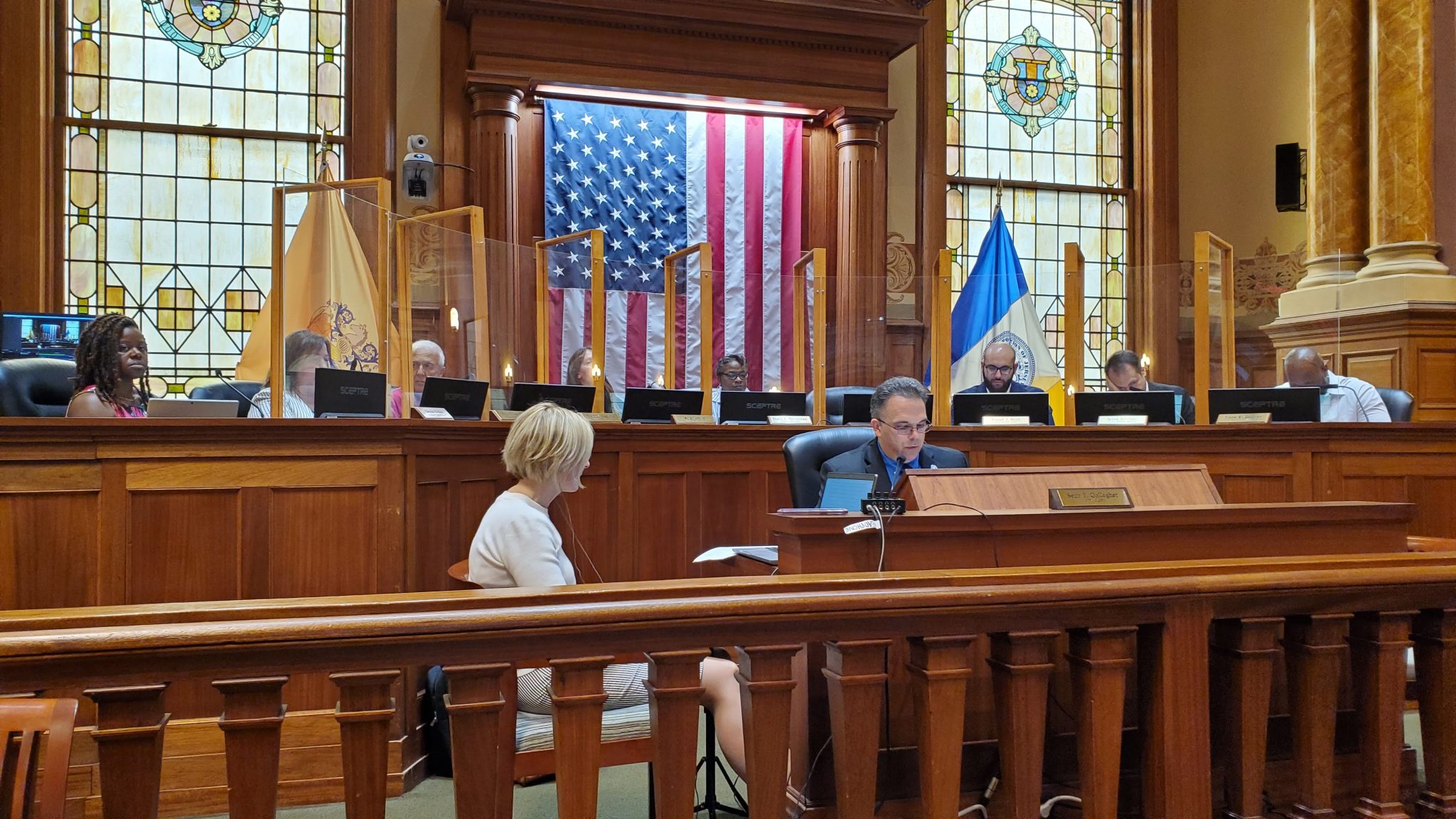 At its July 13 meeting, the Jersey City Council approved the budget for the Exchange Place Alliance Special Improvement District and approved three cannabis retail candidates, moving them closer to opening.

Council voted to present and approve the budget over objections from the public, concerned about the fate of the historic Katyn memorial as improvements are made to pedestrianized Exchange Place.

The proposed budget of $9,752,000, which was approved by the Exchange Place Alliance Board of Directors on June 13, includes $5,500,000 for “capital improvements” to the place. According to a memorandum attached to the budget resolution, the Alliance is seeking to use the budget to complete the Exchange Place Plaza renovation project.

Redevelopment plans proposed by the Exchange Place Alliance include a new service road and pedestrian plaza, but the most controversial part includes the addition of a semi-circular bench and greenery in front of the memorial.

The Katyn memorial commemorates the massacre of more than 22,000 Polish soldiers and prisoners of war by the Soviet Union in 1940. It had been planned to move in 2018 to make way for renovations to the square, but it was canceled in following a backlash of the plan.

The city’s planning board originally voted against recommending the designs a few months ago, but reversed its decision after the Exchange Place Alliance filed an appeal. A number of people, including those in the Polish American community, have spoken out against the pew as a potential obstruction that harms the memorial.

Opposition to the renovations continued at the council meeting, with a number of people opposing them in public comments. John Czop, director of political planning at the Polish American Congress, was one of those who spoke.

“Please don’t perpetrate the second cover-up of the Katyn Forest massacre,” he said. “The first cover-up was perpetrated by Joseph Stalin, who blamed the murder of 25,000 Polish prisoners of war on Nazi Germany. So covering up the Katyn monument will in fact cover up this crime without punishment once again.

Resident Jeanne Daly, who is suing the Exchange Place Alliance and the Planning Board over their approval of the plans, accused the Alliance of “violating our laws and procedures”.

“What kind of business is going on here?” she exclaimed. “It’s all illegal, all of it, and I don’t get anything from the city council.”

Exchange Place Alliance executive director Elizabeth Cain said in public comments that they and the board have “the greatest respect” for the Katyn memorial and have worked “very, very hard for three years” to develop their plan. “You’ll see it really highlights the statue and all the beautiful things at the water’s edge,” she said.

Council voted 6-0-2 to approve the budget, with Council Chair Joyce Watterman (who is the Alliance City Council representative) and Councilor Rich Boggiano abstaining, and Councilor Daniel Rivera absent from the meeting that night.

The resolution states that following the approval of the budget, the City Clerk must schedule a public hearing on the budget within 28 days of the resolution before it is finally passed by city council.

Cain declined to comment on public comments when questioned by the Hudson Reporter after the meeting and posed questions to a press spokesperson. She then said in an emailed statement that the EPA “applauded[s] the council’s budgetary action last night.

“The Exchange Place Alliance will continue to provide important programming for our neighborhood,” she said. “The budget includes funding for the renovation of the square, which will be a wonderful change for the residents of the community who overwhelmingly support the project.”

Jersey City moved one step closer to becoming greener with the council’s vote to support three cannabis retail stores seeking to establish dispensaries in the city.

The three applicants that have been approved are Blossom Dispensary at 746-748 Tonnelle Avenue in the Heights, MMD NJ at 655 Newark Avenue in Journal Square, and WR Wellness at 150 Bay Street in downtown. All three had received prior approval from the Planning Commission and the Cannabis Control Commission.

Once applicants have received state approval, they must return to the city’s cannabis board for final approval. After that, one of the three could become the very first legalized retail cannabis store to open in Jersey City.

Hugh Giordano, a union representative for UFCW Local 152, spoke out in favor of MMD NJ and WR Wellness, saying the two had signed labor peace agreements with the UFCW. “What does that mean?” he said. “That means good jobs, good wages, health care, dental care, vision care, prescriptions, retirement. These workers will most likely enter this industry well trained.

Resident Laura Moss, who lives in the Hilltop area of ​​Journal Square, said MMD met with the community to ask about the neighborhood and how to run their business, to which she said she was “really refreshed” that they did in relation to other interest groups.

“Am I naive enough to think there won’t be any problems down the line? No,” she said. “But I’m comforted by someone who came up and said ‘we want to make your neighborhood better, how can we do that? instead of ‘we’re coming, it’ll be better, you’ll see’.

Resident Andres Lorenz, who lives in the Powerhouse Arts District where WR Wellness may be located, took issue with the aforementioned petitioner, however, saying he was concerned about burglaries near a dispensary and the proximity of nearby childcare facilities.

“Unlike Laura Moss, who spoke earlier in the Hilltop neighborhood, WR Wellness did not ask us what we residents and business owners think they are opening a store in our building,” a- he declared. “The safety and well-being of our neighborhood and our community is a matter of extreme importance to me and my family, as well as to my business, which is also across the street from this dispensary.”

The council voted 7-0-1 to approve the three dispensaries, with Boggiano abstaining from all three votes.

For updates on this story and others, check out hudsonreporter.com and follow us on Twitter @hudson_reporter. Mark Koosau can be reached at [email protected] or on his Twitter @snivyTsutarja.