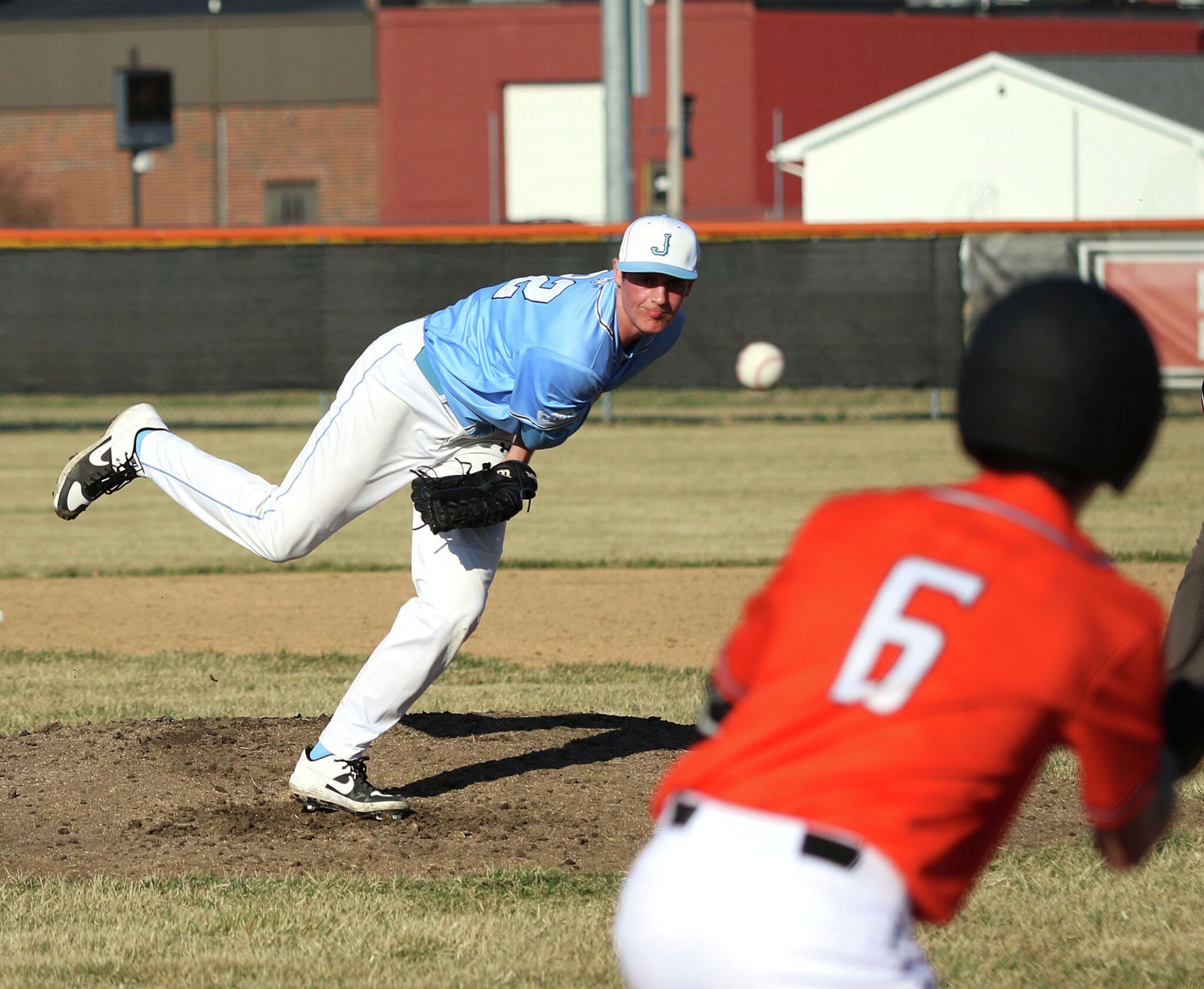 Sam Lamer filled the area with strikes Tuesday at Ken Schell Field. And the Mascoutah Indians were missing a lot.

As Lamer hit a career-high 13, the Jersey Panthers beat Mascoutah 1-0 in a Mississippi Valley Conference baseball game in Jerseyville. The Panthers are 14-10 and 3-3 in the Valley. Mascoutah is 17-6, 4-3 in the MVC.

Lamer, a senior right-hander, blanked the Indians on 102 shots, including 71 strikes. He walked one while limiting Mascoutah to three hits and beat Indians starter Austin Musso, who struck out 12, walked two and gave up a run on four hits on 101 pitches in six innings.

Lamer also scored the game’s only run in the fourth inning. He doubled with one out and scored on Tanner Brunaugh’s two-out RBI single.

Southwest 12, Vandalia 5 – The Piasa Birds went unbeaten in the South Central Conference by beating the Vandals at Schneider Park in Brighton. Southwestern is 16-9 and 5-0 in CSC. Vandalia is 11-11 and 3-4 in the league.

East Belleville 2, Edwardsville 0 –The Lancers scored two unearned runs in the fifth inning to break a scoreless tie and that score held in a battle of Southwest Conference favorites in Belleville.

Doubles by Riley Iffrig and Kayden Jennings were the only hits the Tigers could produce against East pitchers Zander Mueth and Kannon Walker, who combined to strike out eight and score one in the shutout.

Granite City 10, Alton 3 –The Warriors opened a close game with five runs in the fourth inning and beat the Redbirds in a non-conference game at Babe Champion Field in Granite City. The granite is 9-10. Alton is 5-16.

James Vambaketes and Alex Siatos each had two hits for the Redbirds. Max Ontis took the loss, recording seven runs (five earned) on seven hits, one walk and eight strikeouts in 3 1/3 innings. Granite had three hits, including a home run and a triple, from Lucas Haddix and five RBIs from Brady Smallie. Dakota Armor pitched six innings for the win.

Marquette Catholic 15, Carrollton 0 –A first-inning single from Grant Pohlman was all the hits the Hawks could muster against Logan Sternickle, whose hit led the Explorers to a four-inning rout under the lights of Moore Park in Alton. Marquette is 18-10 years old. Carrollton is 8-12.

A pair of three-run innings gave the Explorers a 6-0 lead before racking up five runs in the third inning and four runs in the fourth. And as good as Sternickle was on the mound as he walked none and struck out five in a one-hit shutout, he was even better at the plate.

Sternickle hit two homers and a triple to lead in seven runs for Marquette, who had three RBIs from Hayden Sherman and two RBIs each from Caleb Gardner and Myles Paniagua.

Brown County 7, Greenfield 3 – The Tigers cut their deficit to 5-0 with three runs in the sixth inning, but the rally ended there and the Hornets won at Mount Sterling. Brown County is 21-2. Greenfield is 18-5.

Brady Pembrook had two of the Tigers’ six hits against Hornets pitcher Colby Wort, who gave up three unearned no-walk runs and five strikeouts in seven innings. Gabe Blakely had a home run and three RBIs for Brown County. Greenfield’s Talon Albrecht started and gave up two unearned runs in 2 2/3 innings to absorb the loss.

Father McGivney 12, Maryville Christian 1 –The Griffins broke a 1-1 tie with a six-run third inning and closed out the Lions in a five-inning Gateway Metro Conference game at Maryville. McGivney is 23-3 with a 22-game winning streak.