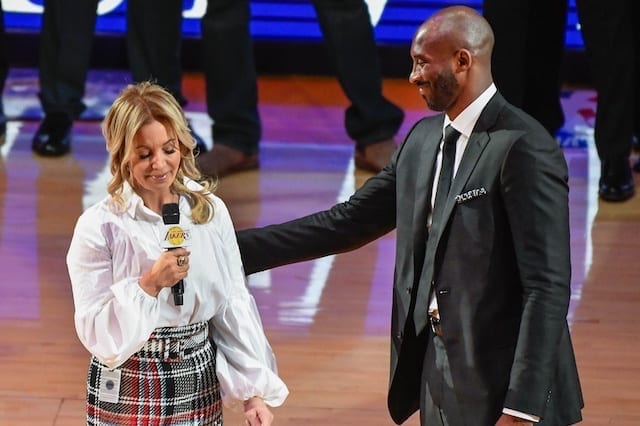 The Los Angeles Lakers have retired both of Kobe Bryant’s jerseys – but have yet to honor the late franchise legend with a statue outside Crypto.com Arena.

Sculptures of six great Lakers names adorn the Star Plaza near the team’s arena: Magic Johnson, Jerry West, Kareem Abdul-Jabbar, Elgin Baylor, Shaquille O’Neal and iconic LA broadcaster Chick Hearn. However, the Lakers have yet to commemorate Bryant’s greatness in a bronze statue outside the sports complex, commonly referred to as “the house that Kobe built.”

But in a recent interview with NBA.com’s Mark Medina, franchise owner Jeanie Buss assured the Purple and Gold faithful that she’s had discussions about erecting Bryant’s statue alongside the other famous members. of the Lakers family:

Mark Medina: Are there any plans you can share on when Kobe will have his statue?

Jeanie Buss: These are all things we discuss internally. Don’t worry, we haven’t forgotten anything. But it has to be done in the right way and at the right time.

Earlier in July, Buss tweeted that he missed Bryant and called him “the greatest Laker of all time” who “understood the team rather than himself.”

In another move to commemorate Bryant’s memory, the Los Angeles City Council planned to rename the three-mile stretch of Figueroa Street between Olympic Blvd and Martin Luther King Jr. Blvd — which runs past Crypto.com Arena — to Kobe Bryant Blvd.

However, voting on the proposal has been postponed until October 21, 2020, and a new date has yet to be set.

Among the outstanding tributes to the Lakers legend, the team has still not retired Pau Gasol’s jersey after winning two NBA championships alongside Bryant in six years with LA.

However, Gasol recently hinted at a possible shirt retirement ceremony which would take place during the 2022-23 campaign. “The ceremony could be next season. Yeah, I spoke to the franchise and the Buss family. We are all very excited,” he said on RAC1.

Are you subscribed to our YouTube channel? It’s the best way to watch player interviews, exclusive event coverage, participate in live broadcasts and more!