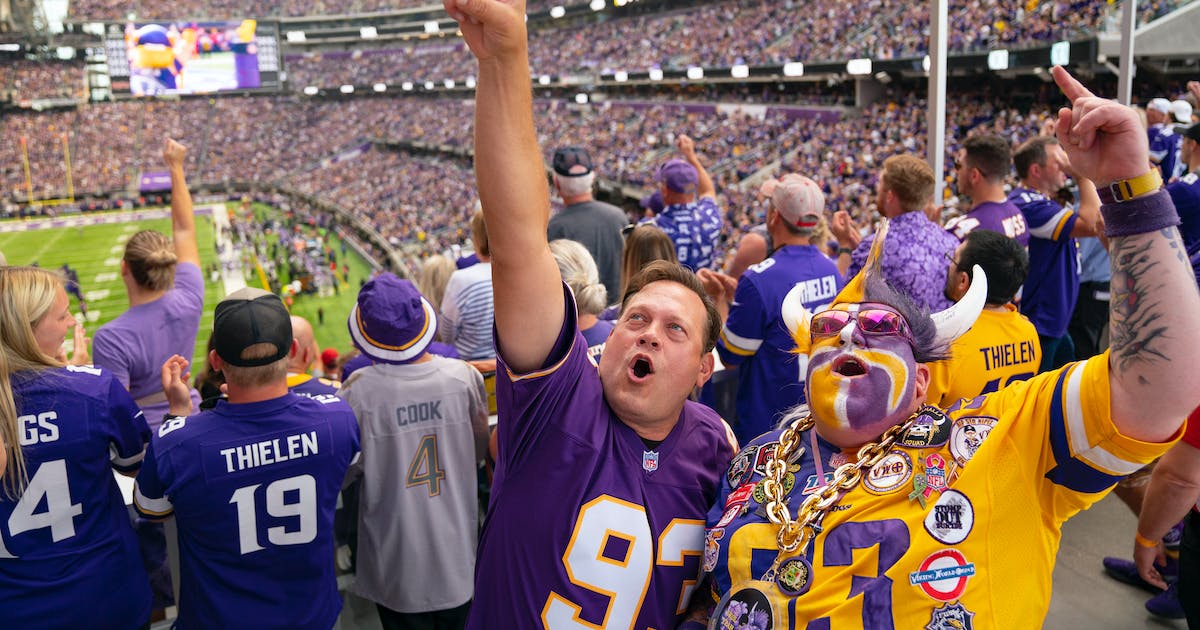 “I have a Vikings jumpsuit just in case he has a blowout,” she said.

Like many families and sports fans across the Midwest, the Koepplins said they had no hesitation in visiting Minneapolis despite gun violence and public safety concerns.

More than 80,000 people converged downtown to watch games at US Bank Stadium and Target Field on Sunday, marking one of the busiest days in the city amid four recent shootings that injured 11 people , including two pregnant women, and killed a 16-year-old on the north side and a man in a downtown bar.

Darcia Larsen, who drove here with her family from Culbertson, Montana, said she learned of the fatal bar shooting on television that morning but was undeterred. “You can’t let this stop you,” she said.

“It’s going to sort itself out,” she said of the violent crime.

Fourteen members of the Calisto family from Logansport, Ind., gathered for a group photo outside US Bank Stadium to commemorate a 30-year tradition of traveling to Minneapolis to watch the Packers play — and it just so happens that it was the season opener.

David Calisto said an increase in crime in the town where he and five of his nine siblings were born is very sad. “But we still consider it our hometown,” he said.

His sister Cindy Hallam added that Minneapolis would bounce back – a similar hope they hold for the Vikings going to the Super Bowl.

Duluth mother and son Krista and Jon Pascoe said Sunday was special for several reasons – the most obvious being a handmade Vikings Skol belt for Jon’s 30th birthday. They have attended the season opener for the past five years, but this is the first time it has fallen on his birthday, 9/11.

Krista Pascoe said she remembered sending her son to school 21 years ago with cupcakes he never got to share with his class and asked him if it made him sad.

“‘I’m sad that so many people are forever sad on my birthday,'” she recalled saying her son had said, which she said was “pretty insightful for a little kid.”

Claudia and John Flaska, a retired couple from Lake Elmo, said they attended the Twins game on Friday night, which was delayed due to rain, and found themselves later than they would like.

“During the day it’s a little easier to be downtown,” John Flaska said. “The crowd aspect contributes to the level of comfort.”

The Flaskas said violent crime would not prevent them from attending events. But John Flaska said he was a bit surprised to see such tight security outside the stadium, including private companies contracted to use hand-held metal detectors on anyone entering the Commons at US Bank Stadium for a concert country music before kick-off.

With congestion and crowds increasing, the city announced in a “game readiness” news release that police and firefighters would be stationed throughout downtown during peak hours before and after the events, joined by expanded foot patrols. Along with other unspecified units, the police patrolled on horseback, bicycles and mountain bikes.

Traffic control officers were deployed at busy intersections to ease the game day congestion. Thousands of people descended on Metro Transit trains and buses downtown to avoid major entrance and exit routes that are closed for construction.

The streets around the US Bank were filled with purple and green jerseys, Zubaz pants and make-up. A jubilant energy, almost like Christmas morning, infused the atmosphere with the occasional rumble of cheese heads.

The whistle of traffic control officers directing drivers echoed the horns of a Minnesota National Guard Humvees. The military stood outside the ball field and football stadium on Sunday, but this time – unlike recent civil unrest – they were only there for public relations and recruiting.

“Today was all about having fun – kids smiling and shaking hands. There were also lots of stories about 9/11. It was just engaging with the community in a positive light” , said the battalion commander. Ryan Rossmann. “It was a great day all round, and it looks like the Vikings are going to win as well, so that’s a plus for all of us.”