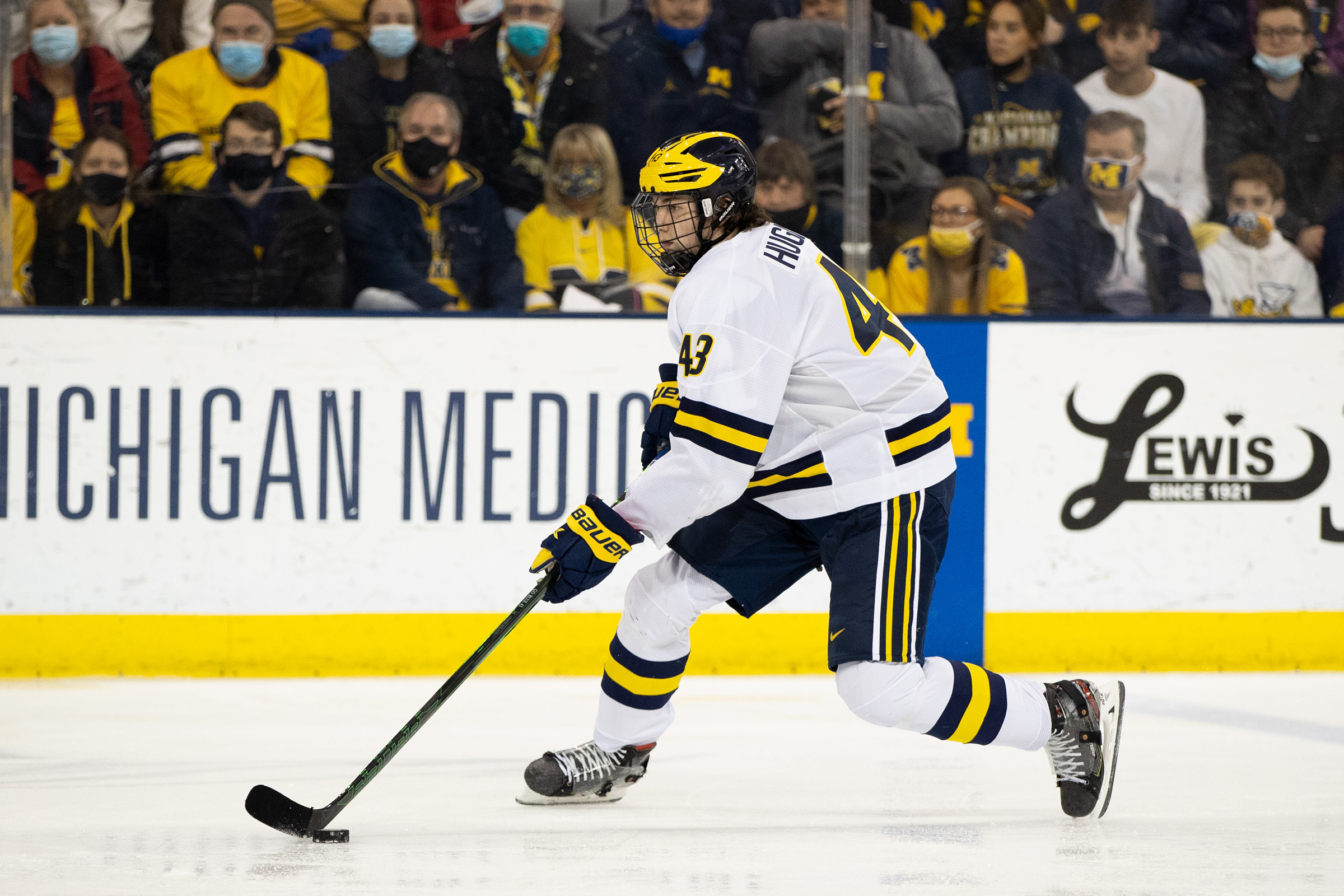 Last season, New Jersey Devils prospects Luke Hughes and Ethan Edwards each saw freshman campaigns with the Wolverines. With the season ahead, the two look set to continue their debut into successful sophomore seasons.

But the Devils’ influence on Michigan’s roster doesn’t end with them — it only gets stronger.

“The focus will always be on Michigan,” Casey told the Daily in August. “Whether we’re with the same organization or not, we’re going to build that chemistry and that bond.”

And it is a bond that will be put to the test.

Together, Hughes, Edwards and Casey have the added responsibility of balancing their professional and academic aspirations, while simultaneously maintaining their relationships with each other. With the Devils’ draft strategy, they will inevitably have more hockey experience with each other in the future.

And that’s not a bad thing.

Their added connection outside of Ann Arbor has the potential to strengthen their bond both on and off the ice. All three have the right mentality. All three understand their combined growth potential. And all three recognize they have an opportunity to elevate Michigan hockey.

“The tighter the team, the more chemistry you’ll have on the ice,” Hughes said. “And the more (chemistry) you (have), you block a shot for this guy. You know, do something to help your teammates and help the team win.

The camps they trained at together outside of Ann Arbor have already benefited their on-ice product for the upcoming season. In July, as Hughes was preparing for the Junior World Championships, Edwards and Casey officially met on the ice at New Jersey’s summer development camp.

“Going to camp with (Casey) was the first time I really got to see him play in a more competitive environment,” Edwards said. “It was really good and he made a real surreal at this camp. He’s… an extremely gifted player, it will be fun to watch throughout the year.

With a shared future creating a united backdrop, Hughes, Edwards and Casey have a unique opportunity to enter this season as a stronger and more cohesive unit. By playing and connecting with each other outside of Michigan, they’ve solidified their strengths while finding opportunities for growth — growth that’s also important to the Devils.

“You play with highly drafted players every day and I think that can only help a kid in their development,” said New Jersey player development coach Eric Weinrich. “So it gives a lot of benefits to a kid to play at a school like Michigan. It’s just a win-win for us, and it’s a win-win for the kids.

Michigan’s upcoming season is undoubtedly the trio’s priority, but they are acutely aware of their professional trajectory.

It’s rare for an NCAA hockey program to have three NHL draft picks at the same time. Having three with the same professional organization is unprecedented.

While the trio will be laser-focused on meshing with the entire roster, their roots together inevitably run deeper than with some of their teammates – both on and off the ice. After the Devils drafted Casey in July, Edwards and Hughes — whom the Devils drafted in the 2020 and 2021 NHL Drafts, respectively — quickly reached out to congratulate him.

“(It’s) great that we have a bit of a band,” Casey said. “So yeah, they thought it was funny and kind of a coincidence (that we were all going to the same team), but I got a lot of kudos from them.”

The Devils see the benefits of compiling talent within one program. While New Jersey’s footprint may be coincidental, the benefits that come with the organization’s junior players building chemistry before hitting the ice at the pro level are undeniable.

Whether it’s building relationships off the ice on a college campus or benefiting from hockey’s synergistic systemic growth of the same playbooks, coaching style and goals, the potential for skill development is immense. .

And while the Michigan team as a whole grows together on and off the ice, Casey, Hughes and Edwards have additional bonds that bind them – and help each other take their game to the next level.

Because at the end of the day, those ties developed through the Devils organization have yet to galvanize to succeed in Michigan. Although they are Devils prospects within the Michigan program, they are also Wolverines within the New Jersey organization.

The Devils understand that as much as their hopes.

“We make it clear from the start of the season with the coaches (of the junior players) that we are not the coaches of the players who are part of our organization,” Weinrich said. “And we’ll leave the coaching to, you know, the respective teams the kids are playing for.”

Together, the trio have some of the strongest hockey support systems available to them, both organizationally and personally.

“Obviously, me and Luke are good friends, …we’re together 24/7,” Edwards said. “…Seamus coming this year, it (is going to be) the same. We’re a very tight-knit team, all around and even though he’s in a different class, we still have that New Jersey connection.

Obviously, the strongest shoulders to lean on are those of others. The trio’s shared future forges an unbreakable bond.

A bond they hope will bring Michigan greatness.