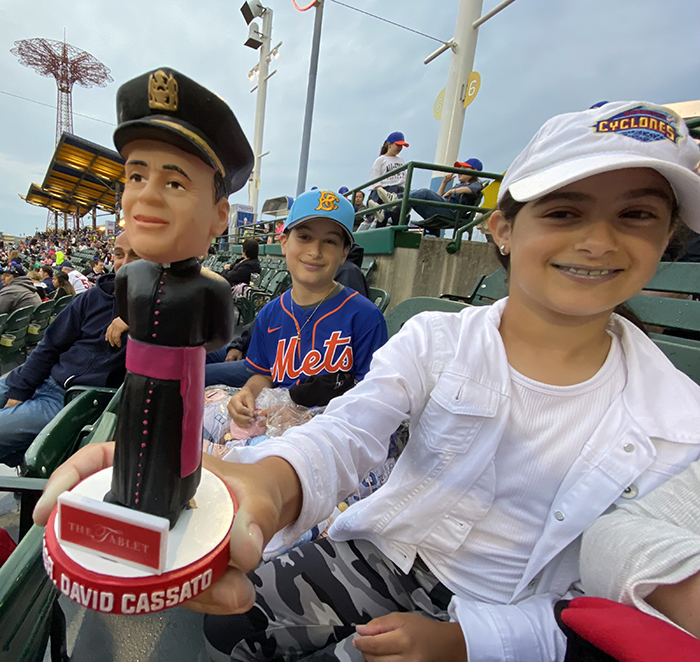 CONEY ISLAND — It would have taken more than a little rain to wash away the night of Catholic Schools — and the tilt of the “Collars vs Scholars” diamond — at Maimonides Park on Tuesday night, June 21.

The event honored approximately 60 valedictorians and salutators from Catholic academies and parochial schools in the Diocese of Brooklyn. The “vals et sals” received commemorative medals for their academic achievements.

“They are a credit to their schools,” Bishop Robert Brennan said. “And I’m glad they came out tonight so we could show them our appreciation.”

And yes, there was a minor league baseball game on the schedule, pitting the hometown Brooklyn Cyclones against the Jersey Shore BlueClaws. This gave Bishop Brennan the opportunity to make his first visit to Maimonides Park to watch the Cyclones, a minor league affiliate of the New York Mets – his favorite team since he was young.

Hundreds of children and their families skipped the rainy weather to participate in the event, which included the free distribution of figurines of Msgr. David Cassato, vicar of Catholic schools for the Diocese of Brooklyn, who recently announced his retirement as pastor of St. Athanasius Parish in Bensonhurst.

Msgr. Cassato was all over the park Tuesday night.

He threw one of the first pitches of the game and presided over the pre-game softball game between the Diocesan Priests, the “Collars” wearing black jerseys and the “Scholars” – Catholic school principals, teachers and school administrators, in white.

Msgr. Cassato started out wearing the Collars jersey, but later switched to a white Cyclones jersey with red lettering. He will remain busy as Vicar of Catholic Schools and in his role as Deputy Chief Chaplain of the New York Police Department.

Catholic Schools Night was sponsored by the Diocese and DeSales Media Group.

Tom Chadzutko, who recently announced his retirement as Superintendent of Schools in the Diocese, attended the match. Also in attendance was Chadzutko’s successor, Deacon Kevin McCormack, currently principal of Xaverian High School in Bay Ridge.

“Tonight is a great night because it brings everyone together to have a good time,” said Deacon McCormack, who begins his new job July 1. “We celebrate scholarship recipients because they are the best kids in our schools, but they represent so many other great kids.

Joe Venticinque, principal of Notre Dame des Neiges Catholic Academy in Floral Park, said he had a “blast”. He scored two points in the Scholars’ 9-6 win over the Collars.

“It was just a great night to get together, celebrate Catholic education and have fun doing it,” he said. “I got to see some colleagues that I hadn’t seen in a few years due to COVID. It’s really been one of our biggest events in recent years.

The students also celebrated the Night of Catholic Schools, sponsored by the Diocese and DeSales Media Group.

“It was good to represent our school,” said Joseph Kearney, who will be entering Grade 7 this fall at St. Bernard Catholic Academy in Mill Basin.

His sister Mia, who goes to 4th grade, said she didn’t know much about baseball, but was grateful for her school, saying, “We’re getting to know Jesus and the Catholic rites.”

His brother said, “I just like to get to know God.”