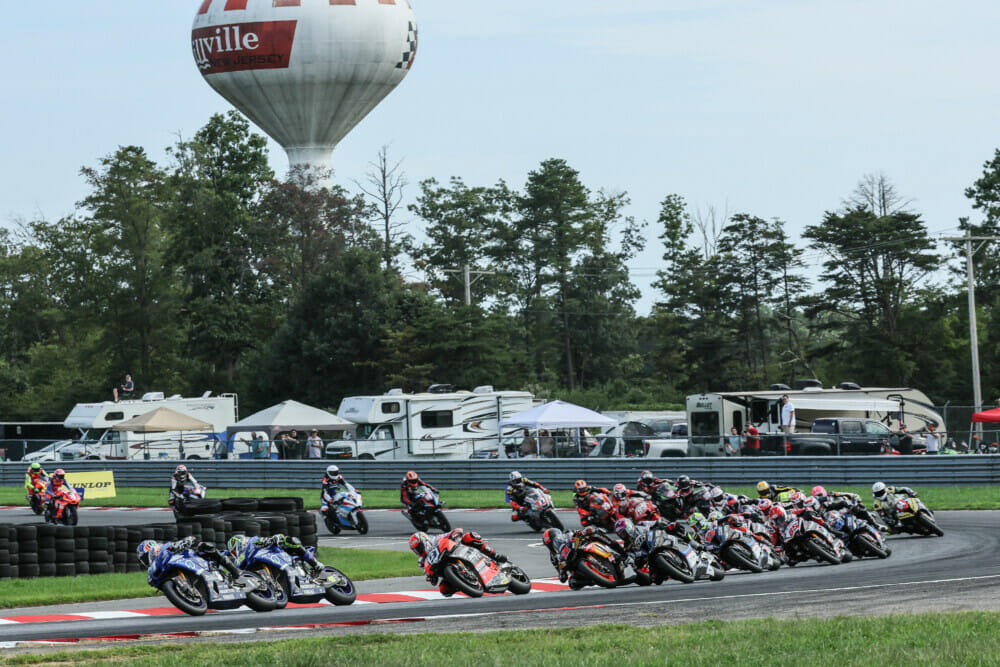 Fresh N’ Lean Progressive Yamaha Racing’s Jake Gagné took a big step toward a second MotoAmerica Medallia Superbike Championship on Saturday at New Jersey Motorsports Park with the defending champion extending his advantage in the title chase from one point to 13 points.
Gagne wins his 11e Medallia Superbike Race of the Year and the 28e of his career on a sunny afternoon in New Jersey. With his latest win, Gagne found himself tied on the all-time AMA Superbike winning list with former AMA and World Superbike champion Ben Spies. Not a bad company, especially considering Gagné only won his first race last year.

Gagne beat teammate Cameron Petersen by 4.88 seconds with Mathew Scholtz emerging second in his battle with compatriot Petersen, with the Westby Racing driver finishing less than half a second behind Petersen in third place.
The podium was Petersen’s 10e on the year with Scholtz on the podium for the ninth time in 2022.
Gagne’s championship rival Danilo Petrucci finished fourth on the Warhorse HSBK Ducati NYC Panigale V4 R, with the Italian only finishing on the podium for the second time this season. Petrucci entered the NJMP behind Gagné by just one point, but his title run took a hit with Saturday’s result, and he now trails by 13 with three races to go.
Pole sitter PJ Jacobsen finished fifth after losing his long battle with Petrucci, finishing just 0.051 seconds behind the Ducati at the finish line.
Jacobsen’s teammate Hector Barbera was sixth, around 10 seconds behind his teammate and just 1.2 seconds clear of Disrupt Racing’s Hayden Gillim.
Aftercare Hayes Scheibe Racing’s Ashton Yates finished eighth with Vision Wheel M4 ECSTAR Suzuki’s Jake Lewis and Tytlers Cycle/RideHVMC Racing’s Travis Wyman rounding out the top 10.
There were seven non-finishers, including Vision Wheel M4 Suzuki’s Richie Escalante with his GSXR-1000 suffering from mechanical failure.

Royal Enfield building. Form. Race
The Ladies of the Royal Enfield Build. Form. Race. held its penultimate round at New Jersey Motorsports Park, and they kicked off Saturday with their star race. Crystal Martinez was the fastest rider in Practice 2 on Saturday morning, and that portends things to come for the Californian, who also took pole position in the race. Martinez had her hands full in the race, and it looked like Illinois rider Chloe Peterson was in for the win.

However, on the final lap, Martinez took advantage of a mismatch missed by Peterson and passed her just short of the finish line. Washington-based rider Jennifer Chancellor completed the podium in third.

Herrin did what he had to do, which was to finish ahead of Rocco Landers of Landers Racing Yamaha. As Hayes pulled a gap up front to win by just over four and a half seconds, Herrin and Landers raced back and forth until Herrin edged Landers for good and cemented his title with a second. square. while Landers came in third.

Sportbike Junior CupTrackGear.com
The home track advantage definitely came into play in the first race of the SportbikeTrackGear.com Junior Cup, as the podium was made up of riders who are all from the northeast and consider New Jersey Motorsports Park their home track. . Gus Rodio of Hammonton, New Jersey took the win aboard his Rodio Racing Kawasaki, while Bauce Racing/JL62 Team Kawasaki native Joseph LiMandri Jr. of Garden City, New York was second. Third place went to new BARTCON Racing Kawasaki team member Spencer Humphreys, a native of Easton, Pennsylvania.

There were plenty of dice for the lead, as is usually the case with MotoAmerica’s entry-level road racer class, but in the final run to the ladies, Rodio had a clear path to the before, and he took the opportunity to win the race by just 0.016 of a second.

REV’IT! Twins cut
The day ended with the REV’IT! The only Twins Cup class race of the weekend, and it was a good race. Blake Davis picked up his third win of the season aboard his N2 Racing/and he did it in a surprisingly dominant way. 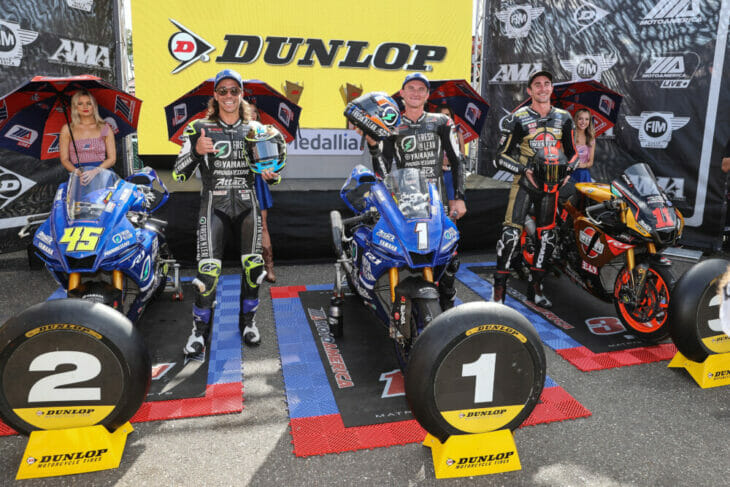 With five minutes remaining in Q1 at New Jersey Motorsports Park on Friday, normality returned to the timing sheet in the MotoAmerica Medallia Superbike class with the championship’s top two – Fresh N Lean Progressive Yamaha Racing’s Jake Gagné and Danilo Petrucci of Warhorse HSBK Racing Ducati NYC. – moving to first and second respectively. Or so it appeared.
Before the five-minute mark, it was Tytlers Cycle Racing’s PJ Jacobsen with the fastest lap time. Then, just five minutes from the end, Gagne and Petrucci launched their fast laps and took the lead. But then – with less than a minute left in the session – Jacobsen showed he was serious over the weekend and returned to the top with his 1:20.365, putting him just half a second off the record of Cameron Beaubier’s Superbike lap at the NJMP.

Jacobsen’s flyer left the two championship contenders, Gagne and Petrucci, scratching their heads and hoping to restore order in tomorrow morning’s Q2 session.
Thus, the provisional first line is made up of Jacobsen, Gagné, Petrucci at the end of Friday.
“I think we’re doing the job we need to do,” Jacobsen said. “We are on provisional pole at the moment and we will have the qualifying tires tomorrow. I think lap times can be quite fast, maybe 19 seconds. »
Jacobsen’s teammate Hector Barbera finished the day fourth, 0.491 seconds behind but ahead of Gagne’s teammate Cameron Petersen. Petersen is the last runner at the same second as Jacobsen. Westby Racing’s Mathew Scholtz finished the session in sixth position.

Supersport
Four-time AMA Superbike champion Josh Hayes was back aboard his personal Squid Hunter Yamaha YZF-R6 at the NJMP after spending a few races as a back-up rider for Kevin Olmedo on the N2 Racing/BobbleHeadMoto R6.
Apparently he found his comfort zone pulling off a 1:23.001 on Friday afternoon to lead Warhorse HSBK Racing’s Josh Herrin, Hayes’ former Yamaha Superbike teammate on the verge of winning his first MotoAmerica Supersport Championship.
Landers Racing’s Rocco Landers, the only person mathematically still alive in the championship, set the third fastest time in Qualifying 1. The top seven drivers finished the session the same second as Hayes with injury return Sam Lochoff finishing seventh on the Vision M4 ECSTAR Suzuki Wheel.

Inventory 1000
Disrupt Racing’s Hayden Gillim may have seen his championship aspirations vanish in the final round, but he’s not giving up and is ready to end the season with two strong finishes in the Yuasa Stock 1000 class. NJMP round with a provisional pole position on Friday afternoon.
Gillim lapped 1:21.823 ahead of Mesa37 Racing’s Stefano Mesa by 0.261 seconds with champion-elect Corey Alexander third on the Tytlers Cycle/RideHVMC Racing BMW third fastest in Q1.

REV’IT! Twins Cut
Veloce Racing’s Jody Barry has been on the fight bus lately, finishing on the podium in six consecutive races. This after snatching four straight wins at the start of the season. Well, Barry seems to have found his groove in the NJMP as he soared to provisional pole with a record best lap of 1:24.929.
Robem Engineering’s Teagg Hobbs was second in the session with Cycle Tech’s Hayden Schultz third. The top two in the championship finished fourth and fifth with Anthony Mazziotto fourth and Blake Davis fifth. N2 Racing/BobbleHeadMoto’s Davis leads Rodio Racing’s Mazziotto by just one point with three races to go in the series.

Sportbike Junior CupTrackGear.com
Rodio Racing’s Gus Rodio needs to win both races in this weekend’s SportbikeTrackGear.com Junior Cup to have any chance of catching Cody Wyman in the championship. So why not start the weekend on the right foot by taking provisional pole position on Friday afternoon?
It was Wyman and his Alpha Omega Kawasaki Ninja 400 who finished second on the day, with Max Van surviving a near miss on his SportbikeTrackGear.com Kawasaki to finish third. Kayla Yaakov of Altus Motorsports finished the day in fourth place.

Mission King of Baggers
If the battle for the Mission King Of The Baggers championship was a fight, then HD Screamin’ Eagle’s Travis Wyman won the first two rounds after leading the way in the Friday morning practice and Q2 session of the afternoon.
Wyman led Q1 with his 1:25.713 ahead of his brother and teammate Kyle, the defending series champion just 0.047 behind his younger brother. Travis Wyman’s championship rival, Tyler O’Hara, was third and 0.673 seconds behind Wyman’s best on his Mission Foods/S&S Cycle/Indian Challenger.